Skip to content
I thought I’d compile a few notes / points of interest of things I’ve noticed after installing Mac OSX 10.6 Snow Leopard on my development Mac. I’m going to keep updating this page and adding things to it as I come across them.

I use the default install of Apache & PHP and install MySQL from the installer from MySQL.com, I guess I should custom build and install these but it’s easy enough to work with the defaults anyway.

PHP under Mac OSX 10.6 Snow Leopard is version 5.3.0 and thankfully has the GD libraries enabled by default. Especially good for WordPress installs so that it can do image resizing for thumbnails etc.

I noticed I was getting an error relating to timezones on many of my sites, along the lines of:

Warning: strtotime() [function.strtotime]: It is not safe to rely on the system’s timezone settings. You are *required* to use the date.timezone setting or the date_default_timezone_set() function.

The solution I used to this was just to restore the previous php.ini file, this showed in the /etc directory as ‘php.ini.default-5.2-previous’. Just rename it to ‘php.ini’ (replacing any existing php.ini file if it exists, it didn’t for me). You’ll then want to edit php.ini and look for the ‘date.timezone’ setting and put in your timezone info (PHP.net timezone page) and then restart Apache. Hopefully it should be fine after that.

I also started getting a lot of warnings on some of my development sites along the lines of:

PHP Deprecated: Assigning the return value of new by reference is deprecated in…

These are warnings about old deprecated PHP4 era code, recent versions of PHP5 enable these warnings, but you can switch these off by adding an additional error reporting element to your php.ini file in the error handling section:

Just add the E_DEPRECATED part and then restart Apache and the warnings should be gone.

MySQL isn’t installed by default in Snow Leopard so you need to install it yourself. I simply downloaded the latest 64 bit Intel version from MySQL.com, they only show version for Mac OS 10.5 at the moment but it worked fine for me. The installer provides a startup item to make MySQL run at boot time and also a System Preference to control it, it’s worth noting that this is only 32 bit so it will make System Preferences restart itself into 32 bit mode, not a big deal though.

There’s been a fair bit of discussion about Snow Leopard and it being 64 bit. By default Snow Leopard boots into 32 bit mode, however this doesn’t make that big a difference as 64 bit apps will run in 64 bit and access all the memory available on your system. One thing to note though is that the original unibody MacBook (which I have!) can’t startup in 64 bit mode, I’m not sure if that’s a big deal or not though really.

If you want to get into a really in depth examination of Snow Leopard’s 64 bit capabilities then check out John Siracusa of Ars Technica’s comprehensive review, beware though, it’s a lengthy read but it’s a great overview of the new technologies that are under the surface in Mac OSX 10.6.

Flash plugin out of date

The Flash plugin needs updated as the version that comes in Snow Leopard is an old version (10.0.23.1) which has some security vulnerabilities, just go to http://www.adobe.com/go/getflashplayer and download the latest version. There’s been quite a bit of coverage of this online, the gist of it is summed up in this post over on Daring Fireball. Basically the most up to date version of the Flash plugin was probably released after Snow Leopard’s final release version’s features were frozen, so basically Snow Leopard overwrites the newer version with an older version upon install.

It’s easily fixed by downloading the latest version, although I don’t know why Adobe don’t make the autoupdate feature of the Flash plugin a bit more aggressive. I can’t think of the last time I saw any prompts to update it, you can actually adjust the autoupdate settings via the Flash Player Settings Manager page on the Adobe website (which you probably never knew existed!).

I’m not totally sure this is a new feature to Snow Leopard, I may just have never noticed it before! If you hit space or double-click on a print job in the print progress you get a Quick Look preview of your document, even if it’s not new it’s quite a handy feature! 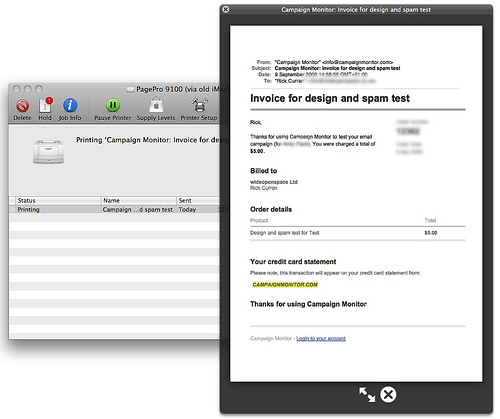 That’s my thoughts / experiences so far, I’ll add more to it as I come across things of interest. Anybody noticed any other new features / issues? Drop a comment if you want and I’ll maybe add it to the notes.