Skip to content
Apple’s 09/09/09 Media event introduced some new things both expected and unexpected, many expected an iPod touch with a camera but instead there was an iPod nano with not only a camera but FM radio and a built-in pedometer! I was surprised about the FM radio as I never expected that to be added to an iPod. Here’s a few of the things Apple introduced today along with some thoughts / notes etc:

Now in multiple colours as well as a special edition stainless steel model. There were rumours that this tiny little iPod was going to be ditched but that didn’t happen. They also announced a new 2GB model along with shuffle-compatible third party headphones and controller peripherals. I’m not sure how much smaller you could make an iPod shuffle really. (iPod shuffle ?) 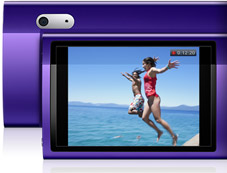 At first I didn’t think an iPod nano with a camera was that big a deal but after watching one of the video clips demoing the video features I found myself wanting one to carry around so that I could film things again. I’ve missed being able to film stuff since getting my iPhone 3G, however, there’s no way I’m buying yet another iPod so I’ll just have to look into getting an iPhone 3GS at christmas time instead! The nano’s video format is 640×480 pixel h.264 video and looks to be pretty good quality, it almost makes me wish Apple would just make a dedicated camera but I don’t think that will happen. (iPod nano ?)

There’s nothing that different in store for the iPod classic, just a simple storage bump from 120GB to 160GB instead. I still like the classic iPod and the scroll wheel, it’s a great interface for accessing files. The iPhone / iPod touch’s touch screen is great but the scroll wheel is still very efficient I think. I wonder though how much time is left for these iPods? Probably still a fair bit, but once flash memory gets into at least 128GB sizes I think the iPod classic will be assigned to the history books. (iPod classic ?)

There was no rumoured iPod touch-with-camera announced, just a price drop on the existing model as well as a 64GB model announced. I think a new version with a camera is in the works, it just doesn’t make sense for the nano to have it and not the touch. Also the lineup is now 8GB, 32GB and 64GB, I’d expect to see it become 16GB, 32GB and 64GB when the new model is announced. That’s just my speculation though. Update: This press release from Apple about the new iPod touch updates paints a slightly different picture though, it indicates that the 32GB and 64GB iPod touches have the same internals as the iPhone 3GS, “The 32GB and 64GB models also include up to 50 percent faster performance and support for even better graphics with Open GL ES 2.0“. Interesting. (iPod touch ?)

An expected announcement and one that took up the majority of the media event. iTunes 9 introduced a revamped interface (with it’s usual introduction of unusual / new interface aesthetics!) and a few other new features. One thing that’s disappeared though is the shopping cart feature, now you have to either add it to the also newly added Wish List feature or you have to use 1-Click purchasing! That’s a little bit scary.

There’s now also the option to share items on the store to either Facebook or Twitter, I was hoping for more integration with social networks, particularly last.fm but alas it’s not to be. One other thing I noticed is that iTunes now finally behaves like all other good Mac apps and will actually maximise when you click the maximise button! Previously this would toggle iTunes into it’s Mini Player mode, I’m really glad they’ve changed this.

Here’s a rundown of some of the new features of iTunes 9:

iPhone OS 3.1 for iPhone (and 3.1.1 for iPod touch) were announced too. It introduces a few new features that tie in with iTunes 9’s new features, nothing massively new but then again it is a point update. Amongst the various features shown on the iPhone OS software update page a couple of little tweaks caught my eye:

Being able to lock an iPhone remotely enhances the already brilliant MobileMe feature of locating your iPhone via GPS and also remotely wiping a lost iPhone. Anti-phishing support in Mobile Safari is a great feature too, something all browsers need these days.

Anyway, enough writing about it all, I’m going to go and re-organise my iPhone apps :)