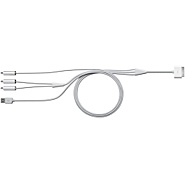 I just bought myself the Apple composite AV cable for my iPod Touch so that I could hook it up to my TV to watch BBC iPlayer programmes. At first I thought the £35 price tag was pretty steep, but seeing as I was at the Apple Store in Glasgow I thought I’d treat myself to something!

On closer inspection though I saw that it isn’t just an AV cable but it also has a USB cable which plugs into a dinky little power supply which comes with both UK and North American power supply connectors, so basically it can be used to charge your iPod and also means that you don’t run out of power whilst watching programmes on it.

Basically the AV cable enables you to watch or listen to any video, audio or images that are on your iPod directly on your TV, this also includes the YouTube application too. Image slideshows can also be viewed via the AV cable.

Those standard features are pretty awesome in themselves but the killer app combo for me is this: 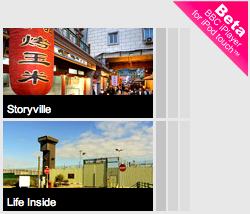 It’s a pretty simple combo but it’s awesome being able to play all the iPlayer content on your TV instead of on your computer. The great thing too is that the iPlayer content via the iPod is actually better quality than the streaming Flash version that you would view on your computer due to it being delivered as H.264 encoded video rather than the Flash ON2 codec that the regular iPlayer uses.

Well, I can’t recommend it enough, the price tag might seem a bit high at first but it’s a high quality cable that provides a power supply and AV connections as well as the ability to use it as a regular USB iPod cable too. If you happen to live in the Uk and have access to the BBC iPlayer then it makes that accessible right in your living room.

The AV Cable is also available for Component video connections too, you can pick one up from the Apple Store online: