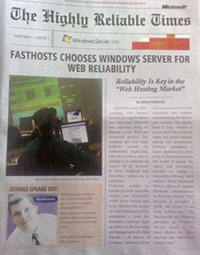 I was reading a magazine at work this morning when I came across an advert for Microsoft Windows Server 2003. The advert is one in a series of ads that Microsoft has been running which aim to promote companies who have chosen Windows Server over Linux because it is more reliable.

Now, admittedly I am a Mac user and obviously this taints my perspective on all things Microsoft ;) but I have to admit I was a bit irritated by the advert. The headline of the advert is, ‘FASTHOSTS CHOOSES WINDOWS SERVER FOR WEB RELIABILITY‘, with a strap-line of ‘Reliability is key in the "Web Hosting Market"‘ (not quite sure why ‘web hosting market’ is in quotes!??).

Now, I’ve been a Fasthosts customer for over 6 years, and although I did host a few sites on Windows going back a few years, almost everything I have running now is on Linux. I use both a basic reseller package, which allows both Windows and Linux hosting, and also a dedicated server running Fedora Core 5 Linux. My annoyance with the advert is that I thought it gives the impression that all of Fasthosts runs on Windows Server 2003 when in reality they offer both Linux and Windows options for all their hosting packages, it’s just their Control Panel and website that runs on Windows Server 2003.

If I was Fasthosts I would be wary of the impression these adverts give out, it could potentially appear as if Fasthosts were not a very pro-Linux host, or even that Fasthosts don’t do any kind of Linux based hosting at all. Of course Fasthosts are the UK’s largest Microsoft hosting partner (and apparently the world’s largest Windows 2003 Server host) so I guess this kind of promotion is to be expected. But, Fasthosts, don’t forget there are plenty of people who prefer Linux over Windows.

When it comes to developing sites using open source software such as MySQL and PHP then the LAMP platform is undoubtedly the best for the job. Windows Server 2003 may be the best, most reliable way to run Windows technologies such as ASP.net etc but you need to choose the right tool for the job. I think in this particular case it was that Microsoft technologies made it much easier to create a system for Fasthosts to use to administrate the setup process for their domain registrations and web hosting. That’s not quite the same thing as saying the Windows Server is more reliable than Linux though.

Ok, rant over. I guess my main points are:

This post continues my ongoing theme of the last few posts which is in response to the issues raised by the BBC choosing to use Digital Rights Managed Microsoft Windows Media format for their new iPlayer initiative. Please read the previous post ‘Dear BBC…‘ for more background information about it.

Where are the alternative formats?

I wrote in my last post about trying to find alternative formats to use instead of Windows Media DRM that could be used to deliver the BBC iPlayer initiative, I didn’t find any real solutions that could compete. I’ve been looking into it a bit more and I still don’t think I’ve found anything. One thing that comes to mind when thinking about video on the web these days is of course Flash video, sites like YouTube and Google Video have meant a huge upturn in the amount of Flash based video content available. What’s more it’s also incredibly easy for people to get it into Flash format thanks to these sites.

Why not use Flash Video for the iPlayer?

If Flash video is so popular then why doesn’t the BBC use Flash for the iPlayer initiative? A good question, and I’ve found a few answers that give some explanation to the reason. I found a post on the FlashComGuru.com website entitled “‘Why we don’t use Flash (video)’ – The BBC speaks up“, the article and the comments left by various people make for interesting reading. This article in turn references a response from the Editor of the BBC News website Steve Herrman regarding changes to the way audio / video is used in the BBC News website. FlashComGuru highlights that the overwhelming reason not to use Flash for video is simply the cost implications of shifting over to a whole new format and delivery method, particularly due to the invested use of RealPlayer format content.

The reponse from Steve Herrman titled “In response to site changes” contains a technical response as to why they don’t use Flash, one reason is:

These are all good intentions obviously, the BBC has a remit where it has to be available to the widest possible audience and this is clearly stated in the first sentence. However, taken in the context of the iPlayer initiative which locks you into Windows Media DRM format and excludes Mac OSX and Linux OS users then this is obviously not the widest possible audience being catered for! Admittedly the article this quote from is specifically talking about the use of RealPlayer and Windows Media format on the BBC News website, but the remit there is the same as for the rest of the BBC.

So ultimately it is an issue of it being too costly to replace all of the existing infrastructure with a Flash based system due to the previous investment in the RealPlayer over the last 10 years. Now I can appreciate that, obviously the BBC don’t want to go wasting the investment previously made, plus they could be perhaps criticised for wasting Licence payers money too. However, why get into a relationship with Microsoft on this? There’s really no likelyhood that they will ever do much to help the fact that DRM’ed Windows Media content can’t be played on Mac OSX or Linux. I can’t see how this represents any kind of good investment of my Licence fee?

Surely there must be an alternative?

I keep coming back to that question, however, I can’t really find any viable alternatives. However, that is not a reason to let the BBC of the hook here. The best thing I can possibly think of is that this is time for Adobe to step up and take on Microsoft in this area, there’s a long game afoot here which Microsoft are pushing with the BBC. If the BBC can’t just dump the investment into RealPlayer technology overnight then how is it going to be any easier to dump investment into the Windows Media format and it’s DRM?

Calling Adobe! Time to get ‘mobile’…

There are obviously big issues going on here, advocating one commercial companies format over another isn’t necessarily the answer. For some this definitely isn’t the answer, especially with the use of DRM within the files. However, despite the prospect of perhaps seeing music available for purchase DRM free, I don’t think we’ll be seeing this happening as easily or so quickly where video is concerned. With that said I think the best option here is for Adobe to get the Flash video format positioned much better as a viable format to compete Windows Media DRM’ed content.

The previous quote from the BBC above mentions the use of Mobile devices as a target end user of the BBC’s content, yet again Windows Media is no solution here at all either with or without DRM. The point is interesting though because Adobe have just made an announcement at the annual 3GSM conference that version 3 of their Flash Lite mobile platform will support Flash video. This provides a vital piece of the puzzle that the BBC is trying to piece together, and a much more platform friendly method at that.

I think the only technical challenge left to fill in is the provision of a decent DRM scheme to use within Flash video, if Adobe can provide that piece of the puzzle then there’s absolutely no reason for the BBC to use Windows Media DRM and cause thousands of licence payers to be locked out of using a service they are entitled to use.

then how can you consider Windows Media DRM a viable solution that is compatible with the remit of the BBC?

Bruce Schneier has written a great article about the DRM restrictions in Windows Vista, more reasons why a lock-in to Microsoft DRM is a bad choice for the BBC: [Via DaringFireball]

This isn’t even about Microsoft satisfying its Hollywood customers at the expense of those of us paying for the privilege of using Vista. This is about the overwhelming majority of honest users and who owns the distribution channels to them. And while it may have started as a partnership, in the end Microsoft is going to end up locking the movie companies into selling content in its proprietary formats.

I think you can replace the words movie companies at the end there with BBC instead. Microsoft desperately wants to have control of the DRM used in TV / Movie / Video distribution, the control they never managed to gain in the Music industry.

There’s an interesting article by Peter Guttman I just saw a link to: A Cost Analysis of Windows Vista Content Protection. It gives a lot of indepth information about Vista’s Content Protection, it’s quite scary reading, the heading above kind of sums it up.