Ever since Macworld San Francisco I’ve been wondering about the future strategy for the iTunes application in regards to it’s name. I mean I know that the Store is known just as the ‘iTunes Store’ and not the ‘iTunes Music Store now but ‘iTunes’ is still a pretty specific reference to Music really.

As the iTunes Store has for a while sold TV Shows and Movies (at least if you live in the US, not for me in the UK though) then it’s pretty obvious that there’s more to it than just music. However, what I’m really talking about is the actual iTunes application. For the last couple of major versions it has supported playback of video as well as audio, this hasn’t been hard to miss. However, the changes that have been slightly under the radar has been the fact that synchronisation of non-music features such as Contacts from the Mac OSX Address Book application, once something handled by the (increasingly redundant!) iSync application, is now handled inside iTunes.

With the announcement of the iPhone then it’s a no-brainer that this handling of Contact information is going to be even more important, perhaps even genuinely useful! (I can count on one hand the amount of times I’ve looked up contacts on my iPod).

One of the innovative aspects of the iPhone is the visual voicemail feature which allows you to browse a list of all the voicemails you’ve received. It’s just a guess but I would imagine that this will be added to the list of things that may be synchronised to your computer via iTunes. Ok, so adding audio voicemail into iTunes is still just dealing with audio files, but I reckon it’s just just the tip of the iceberg in regards to the data that will be contained on the iPhone.

So, with all these different data types in the mix it’s interesting to ponder how the name ‘iTunes’ fits in amongst all of this. Will we see a change of name? Perhaps there is a different iApp required? Maybe, but perhaps it’s a likely outcome that it’s just a further evolution of the iTunes app name to encompass the broader capabilities and functions it contains? Ok, doesn’t take a rocket scientist to come up with that theory I guess.

Anyway, let’s see the names in use amongst the iLife / iWork apps already:

Ok, there’s not a completely consistent ‘iName‘ format here so it doesn’t mean that any new name would have to be in that format. However, I think it probably would be purely because of the core association of iPod and iPhone with iTunes as it is now.

GarageBand as a name is a bit of an odd one out really as it’s the only app in the iLife suite to to have the ‘iName’ format. Of course neither of the iWork apps are in that format either but they are part of the iWork package, I wonder if this is a possible scenario for iTunes as an app? Perhaps it could split off into two or more apps as part of a renamed ‘iTunes’ package? Maybe…

This is just my little bit of idle pondering, but I’m really not sure what the future of the iTunes application and/or name is. Any ideas?

I just saw that the $100 dollar laptop project has announced a final design now, it looks like this: 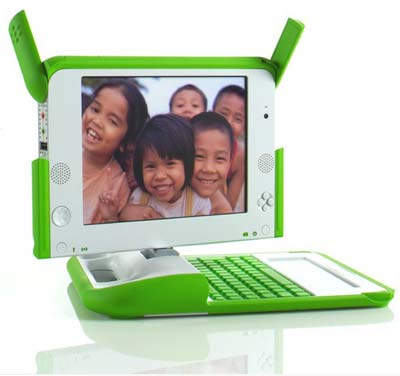 I thought it reminded me a lot of the old key lime iBook: 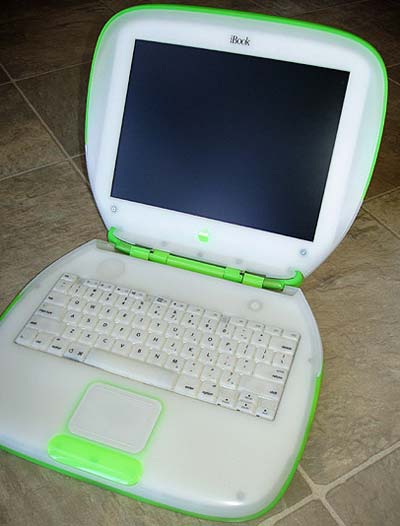 Ok, Wedding Anniversary gifts, the theme was definitely about ‘pods’, Annie got me the book ‘JPod’ by Douglas Coupland and I got Annie an iPod Nano:

The Frenzy Festival was excellent again this year. Sporran Again opened the event again, David Crowder band were awesome. I also got asked if I was one of the members of ‘Delirious?’ too! Last year some people wanted their photo taken with me, which I did obligingly!!!

Frenzy is an excellent event, check it out next year if you missed it this time round.

There’s some more Get a Mac ads on Apple’s site now, check them out at http://www.apple.com/getamac/, they’re quite funny.

I was just reading that Guy Goma, the person accidentally interviewed by the BBC in regards to the outcome of the Apple vs Apple court case, has his own page on Wikipedia.

He seems to have enjoyed quite a bit of fame since the interview and has appeared on TV several times since. Unfortunately the Wikipedia page also says that it has since been discovered that he has overstayed a tourist visa and may be deported due to being here illegally.

If it was on purpose that he stayed I bet he never thought he’d get found out by being put on national television!

Return of the iPod

So, I’d heard back about my broken iPod that I’d sent away. They said it had a faulty hard drive which was what I thought. I didn’t bother getting it fixed as I’d rather spend money on a brand new iPod instead.

It arrived back yesterday and I thought I’d just try to sync it up once more, the darned thing synced uo and managed to copy all the music over without freezing!!! I tried it loads of time the other day and it hung every time! I also managed to listen to two podcasts without any problems, so far it’s behaving itself, I think it’s a matter of time before it goes funny again but I’ll see how it goes.

Maybe it just wanted to go for a wee holiday? The fresh air in Brighton must have done the trick!

It was funny having no iPod for a few days, I’m so used to listening to it that it was hard not to go out and buy myself an iPod shuffle for £49 just so I could listen to podcasts! I resisted though :)

macTV videocast has a cool ad for the new Nike / Apple show, check it out here.

Finally, what’s the difference between Apple and Nike? Answer: one of them makes software and hardware but the other one just makes softwear.

There’s a stack of rumours abound that Apple are hard at work making an ‘iPhone’, an iPod and phone combination. Their recent partnership with Motorola and the ROKR and SLVR phones with iTunes signifies some interest at least in the mobile phone area.

I read an article on ITWire – An Australian IT site called “iPod soon a museum item as cellphones rule” and I wasn’t sure I agreed with the point that the writer Stan Beer was making. Basically his point was that standalone mp3 players such as iPods and also PDAs will be made redundant by mobile phones due to phones getting better mp3 features and bigger storage making them more competitive.

He suggests that the fact that phones come with a lot of other features like cameras, pda-like functions, TV access that this makes them a more attractive option to people, additionally he states, “they also offer a better way to get music“. It’s basically on that point that I think he’s missing something.

The missing issue is that mobile phone companies like to charge a good premium for things like buying music or ringtones online. Unless the cost of buying music is the same £0.99 / $0.99 or less that people pay per track via normal web access then people won’t sign up wholesale to purchase music via mobile phones, it means that people would use it much like the Motorola ROKR phone with iTunes and just transfer from their desktop computer.

Hopefully companies like Helios in the US with their new approach in providing price plans and services targeted at letting people use mobiles to access services such as MySpace or chat apps etc will push the bar for this kind of thing and make the price of mobile web access much much cheaper. Just now it’s pretty expensive, just take a look at Japan and then apply the kind of services they have to the UK and US and maybe people using the “iPhone” to buy music wirelessly will happen. Maybe Apple will just add WiFi to the phone and people can avoid having to use the carriers networks altogether and just download from the ever-increasing amount of wi-fi access-points instead.

Another thing is that not everyone wants an all-in-one device, not everyone wants a mobile phone or wants to pay phone fees, iPods are a cheaper and cheaper commodity and the cost of ownership is low, it doesn’t cost more to own apart from buying new music, cell phone costs are kind of expensive for many people so I would hesitate to say that a standard iPod is going to be redundant in a years time.

One final point is that the iPod isn’t successful because of it’s wealth of features but perhaps rather the dearth of features – it’s simple to use – how many people say that about their mobile phones? All the additional features in the world haven’t helped companies like Creative or even the once-mighty Sony to make a significant dent in the iPod’s success, there’s a huge army of third-party accessory makers for the iPod, I really don’t think the iPod as it stands is becoming obsolete, probably just even cheaper and more prevalent!

So, Annie’s in Toronto. I told her she had to go visit some place special for me.

Can you spot her?

She phoned me up from her sister’s cell phone to tell me she was there! She wins the title “iWife 06”!!!

Well, in my new mission to post on this blog regularly I have gone and created a nice new blog widget for the purpose of quick and easy posting to the site. It’s working pretty well but I still can’t figure out how to save preferences in widgets, it just doesn’t seem to work. Perseverance needed!

With all the hoohaa about Apple’s Bootcamp software that allows you to run windows going on I thought it best to test and see what happens to sites when viewed using Bootcamp.

I chose my friend Alyn’s Blog as a test subject, here’s the results:

So, you can see that sites do look quite remarkably different when using Bootcamp.

It’s that time of year when every MacGeek get’s all excited wondering what new stuff Apple will announce! You know it’s ominous when you try to access the Apple Store UK and you get this screen:

I’m just keeping an eye on Macrumorslive.com where there are up to the moment text updates about Steve Jobs keynote talk, this is where all the goodies get announced, so far there’s a new remote control with FM tuner for the iPod, I’ll update this post in a little while with some more info!!!

If you’ve ver thought about buying a Mac then now is a good time!