Apple made their presence felt at the NAB show in Las Vegas with a preview of the next version of their Final Cut Pro video editing app, Final Cut Pro X. 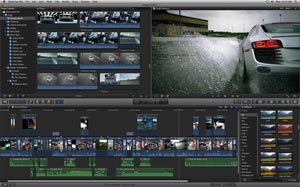 In what is no doubt a long overdue update Final Cut Pro X brings what a lot of Pro video users have been waiting for: a totally redesigned interface, 64-bit memory addressing, multi-processor support, background rendering (no more render window), GPU rendering, use of more than 4GB RAM, video sizes from standard def up to 4k, real-time native format video processing – that’s quite a list!

The other announcement that is pretty awesome – a new price: $299 (not sure what that’ll be in £GBP yet, about £199 I’d guess) and, similar to Apple’s Aperture software which had a price drop recently, Final Cut Pro X will be available through Apple’s Mac App Store.

An often featured subject in blog posts here on Suburbia is the AVCHD file format. Previously AVCHD required transcoding into some other format such as ProRes in order to edit it in Final Cut Pro, so a good question is whether the new ‘real-time native processing’ feature means that this transcoding will be a thing of the past? This is a feature that Adobe’s Premiere Pro has had for a while, albeit one that requires quite powerful hardware to make use of it. It will be interesting to see how Final Cut Pro X compares with this.

Final Cut Pro X is due to be launched through the Mac App Store in June. In the mean time you can find out more about the new features via a couple of YouTube clips filmed at the preview announcement:

Not using a Mac?

Find out how to edit AVCHD on a budget using Windows Movie Maker!

I’ve written a few times recently about the difficulties people have had editing video footage in the AVCHD format that is used by the new generation of Disc-based HD Cameras such as Sony’s HDR-SR7 and HDR-SR8. The main issue when I first wrote about it was that there wasn’t really *any* software available to edit the footage regardless of whether you were using a Mac OSX or Windows based system. Although the cameras had been out since mid 2006 the first fully capable software for editing the footage only became available with the recent release of Sony’s Vegas 7 editing software for Windows.

So things were looking up at least for the Windows using owners of AVCHD capable camcorders, things weren’t looking nearly so bright for those of us wanting to edit AVCHD footage on Apple Mac OSX. Fortunately there are at least a couple of options now for Mac OSX systems. The first option was a bit of a surprise, albeit a very pleasant one!

Apple’s own Final Cut Studio 2 suite had a minor update for Final Cut Pro to version 6.0.1 which added the capability to transfer the AVCHD footage. The reason why this update was a little bit of a surprise is that Apple were not listed on the Official AVCHD Consortium website, at least not until recently. The transfer process converts the AVCHD footage into either Apple’s new ProRes 422 codec or the Apple Intermediate codec. One very important point to keep in mind here though is that the AVCHD transfer on Mac OSX only works on Intel processor based Macs!

Apple has posted a few technote articles regarding working with AVCHD in Final Cut Pro which are worth reading, here’s a few key points to keep in mind:

You can find further information in the following Apple technote, Technote 305997: About transferring AVCHD footage.

Final Cut Studio is a great solution for editing AVCHD footage on Mac OSX, however, if you don’t have Final Cut Studio and can’t afford the £849 to buy it, or if you’ve got Final Cut Studio but you’re using a PowerPC based system (in case you missed the two references above, AVCHD support in FCP is only available on Intel processor based machines!) then there is an alternative – VoltaicHD.

VoltaicHD is a $30 utility that converts AVCHD footage into HDV 1080i Apple Intermediate Codec format Quicktime movies. The Voltaic website sums up it’s purpose clearly: "VoltaicHD converts your HD movie clips into a Mac-friendly format, ready for editing in iMovie HD and Final Cut Express HD". This shouldn’t be taken as a limitation, the converted footage can be used on any video editing application.

The purchase price of $34.99 is a lot less than the cost of Final Cut Pro and the advantage of working with both Intel and PowerPC based Macs is also pretty awesome. It’s a pretty new application but it is at least past the version 1.0 mark and is fairly stable, although the Voltaic FAQ page does list a few common technical issues that they are working on.

It’s worth reading through the VoltaicHD FAQ as they answer quite a lot of common questions about the issues encountered converting AVCHD footage using Voltaic. Some of the questions answered are:

The VoltaicHD development blog is well worth reading as it gives the background to the past and future development of VoltaicHD. There are also some screencasts which are very useful, and finally there is a demo version of Voltaic available to download so you can try it out before paying any money for a licence. The only limitations in the demo are that it will only convert a single file less than 20mb and a limit of up to 10 conversions. However, for $35 buying a licence isn’t going to break the bank!

So which is best, Final Cut Pro or Voltaic?

Well, at the moment I can’t say, I haven’t tried either of these options at the time of writing. I have just purchased Final Cut Studio so I am now in a position to do a bit of a comparision between these two applications, I’ve had a fair bit of footage sitting waiting for the time that I would be able to edit it without having to resort to a Windows PC running Vegas 7! ;)

I’ll hopefully post a bit of a comparison once I get a chance to try both applications out.

But what about Adobe Premiere Pro CS3? Doesn’t it edit AVCHD?

Although Adobe Premiere Pro CS3 has now returned to the Mac platform neither the Mac or Windows versions supports the AVCHD format. There were quite a few rumours and unofficial statements by Adobe employees that indicated that it may have support for AVCHD but I have had it confirmed that there is definitely no support for it in Premiere Pro CS3, although it does look likely that it wil be in the next version. Perhaps there will be an incremental update to bring some kind of compatibility there in the way that Apple have added it to Final Cut Pro? Until that happens Voltaic is the best option for Premiere Pro CS3 Mac users.

Someone posted a link in a comment below to an Apple tech Support article called “iMovie ?08 and Sony HDR-SR1 and HDR-SR7 compatibility” which is worth reading if you’re using one of those cameras, especially if you’re using a G5 processor based system rather than an Intel processor. It just goes to show that Voltaic is definitely a very useful application for those on non-intel, older machines who want to work with AVCHD footage.

Update #2 – VoltaicHD now on Windows! Convert AVCHD for use in Windows Movie Maker

Once you’ve edited your HD footage then what do you do with it? Well, if you want to put it onto an blu-ray compatible DVD then now there’s an easy way! Find out more about RevolverHD.

In my recent post "Update on the ‘Four Mysteries of the Universe…" I highlighted the fact that 3 out of 4 ‘mysteries’ had been answered. Well, Apple answered mystery #2: AVCHD editing software today with the release of Final Cut Pro 6.0.1. The Final Cut Pro update page states:

cameras as they can now (after months and months since the cameras came out!) edit the footage from these cameras!

So, go get your wallets out and buy Final Cut Studio Pro 2 and get editing that AVCHD source footage!